With the new vSphere 5 version, VMware has modified their licensing options. Previously, the restrictions were set on physical CPU and CPU cores numbers but not really on RAM capacity (limits were quite high). Since v5, the restrictions apply to the physical CPU number (no matter how much cores and threads they have) and provisioned RAM (vRAM).

This article will sum’up the VMware vSphere 5 licensing methods, as far as I understood them.

There are two ways to get vSphere licenses: kits or “à la carte”.

Kits are bundles including some or all of the vSphere features and limited to a number of servers/processors. Depending on you I.T. infrastructure, you’ll go for the Essentials or the Acceleration kits.

“A la carte” are licenses dedicated to ESX servers and/or vCenter instance. There are various license “levels” that give you access to some or all of the vSphere features and allow you to manage a certain number of ESX servers (AKA hosts).

One of the most important notion to acquire with vSphere 5 licensing is vRAM. vRAM refers to the virtual RAM allocated to your virtual machines. If you have three (3) VM configured with 2GB of RAM each, the to be licensed vRAM is 6GB ; no matter how much physical RAM you own.

Kits are divided into two categories, defined according to the infrastructure size and the VMware features that are enabled. 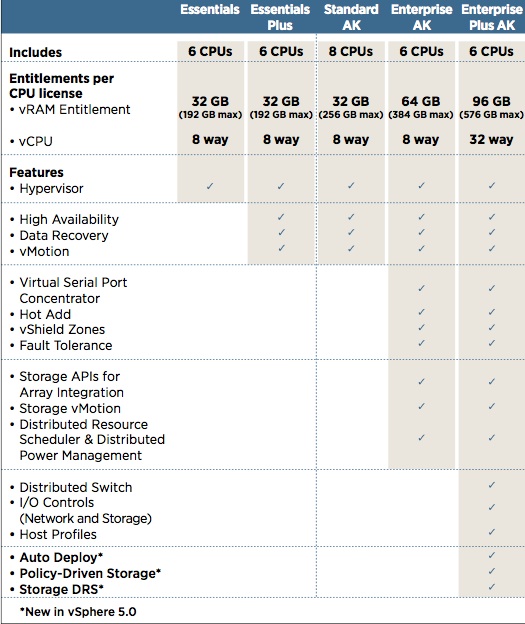 Essentials kits are bundles that provides a vCenter management system and licenses for no more that three (3) virtualization servers. The “Essentials Kit” allow you to “only” manage your hypervisors ; the “Essentials Plus Kit” adds the high availability (HA), data recovery (VDR) and on-line virtual machines move (vMotion) features to your virtualized infrastructure.

The VMware vSphere Essentials kits are limited to:

Essential kits include a VMware vCenter Server Foundation licence ; allowing you to manage, at most, three (3) hosts. Should you have more than three (3) hosts, you could purchase several Essentials kits. But you won’t be able to manage every hosts from the same management console.

Acceleration kits (AK) are bundles that provide a vCenter management system and licenses for an unlimited number of hosts. The limits are set on CPU socket numbers and entitled vRAM. The “Standard AK” provides the same features as the “Essentials Plus Kit”. “Enterprise” and “Enterprise Plus” Acceleration kits adds more features (like vShield Zones, Storage vMotion…) to your virtual infrastructure.

The VMware vSphere Acceleration kits are limited to:

Acceleration kits include a VMware vCenter Server Standard licence ; allowing you to manage an unlimited number of ESX servers. With those kits, you can use Quad CPU servers or hosts with more vRAM (hence physical RAM too).

There are two kinds of vCenter licenses. The “Foundation” version, limited to managing three (3) hosts and the “Standard” version dedicated to managing four (4) or more hosts. The management features defer according to your vSphere or Kits editions.

VMware vSphere Editions are “à la carte” licenses based on CPU and vRAM basis. You have to purchase a vCenter Server license to manage your vSphere licensed hosts. Depending on the vSphere edition, you will have access to some particular vSphere options ; the “Standard” edition provides HA, VDR and vMotion only ; the “Enterprise” edition adds features like vShield Zones and Storage vMotion ; the “Enterprise Plus” adds features like Host Profiles and Storage DRS.

Subscription is a feature that provides you with software patches and updates. Support allows you to get help from VMware should you face any issue with your infrastructure. That said, not every license ship the same SnS level:

Regarding SnS renewing, beware that: “Customers who have an expired SnS must pay reinstatement fees to purchase supported upgrades.” 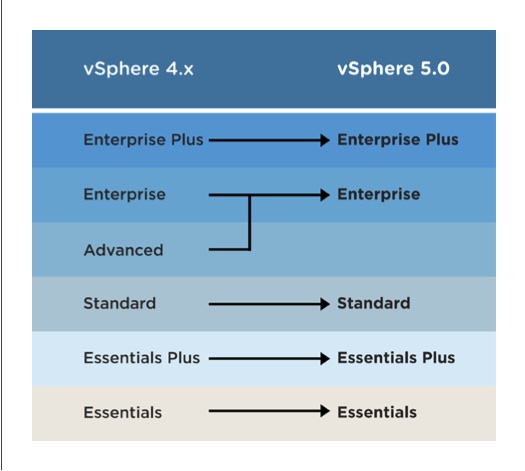 Should you want to upgrade from v4 to v5, you may want to simulate the vSphere 5 licensing model on your actual hardware and virtual environment to check if some modifications have to be done before upgrading.