I own a server at Online.net which now runs VMware ESXi free edition. The thing is VMs have to access the Wild Wild Web and provide public services while still being protected. So let’s configure OpenBSD to do so.

As explained in the Online.net documentation, the hypervisor will keep its primary address for (management) services ; maybe you want to protect it a bit .  An extra fail-over IP and virtual MAC can be purchased to gain Internet access to the hosted virtual machines. The VMs will be protected for the wilds using an OpenBSD virtual machine. 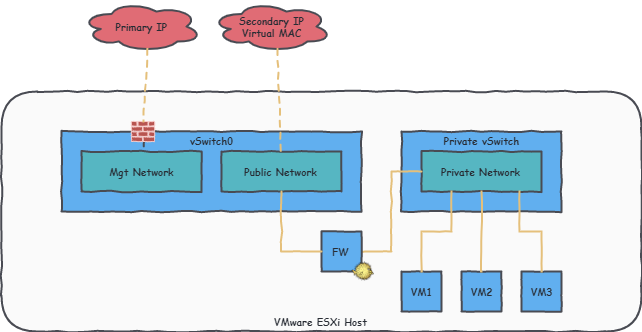 From the Online.net user interface, buy a fail-over IP. Affect this IP as a secondary IP for the ESXi server. Add a virtual MAC address to the secondary IP.

Write down the IP and MAC. They’ll be used by the OpenBSD virtual machine.

I configured the ESXi vSwitch, port groups etc using SSH. Because I have enabled SSH, because it is possible and because it is easier to script ; should you need to apply the whole configuration from scratch… This can also be done via the Web Interface ; I won’t detail that path here.

First of all, I rename the default VM port group so I can identify it easily:

Then I create a dedicated vSwitch to store my LAN virtual machines:

Finally, I sync the configuration with the persistent storage and have the vSphere Web Client aware of that configuration.

In my testings, the vSphere Web Client wouldn’t show the vSwitch and Port Group modifications if not reloaded. Furthermore, the ESXi lost the configuration on reboot if not manually synced.

From the vSphere Web Client, browse to https://<primary_ip>/ui/#/host/vms and create a new virtual machine.

Selecting FreeBSD makes the ESXi happy with OS identification. One can use “Other” but “Status” will end in “Warning” mode rather than “Normal”.

Upload the OpenBSD installation ISO to a datastore, attach it to the VM and boot to run the installation program.

The OpenBSD virtual machine will use the secondary IP address as its public IP. But the default gateway has to be configured to be the primary IP address of the ESXi host. Both not being part of the same network, there is a need to create a static network route.

The installation process will be paused to create the network route.

Apply that configuration to the installed VM. Either by modifying the files on the disk before rebooting. Or by configuring the network from the virtual machine console on reboot.

Building an OpenBSD router is detailed in the PF section of the FAQ . You shall now read it (again) to complete the configuration. You may also read the great Network Management with the OpenBSD Packet Filter Toolset tutorial.

In my case, the virtual machine will host a dhcpd(8) so that the testing VMs easily get IPs, an httpd(8) server to allow internal autoinstall for other OpenBSD VMs, an unbound(8) and ntpd(8) for the whole LAN and a relayd(8) to publish services from the LAN to the Internet. pf(4) limits what can come into the LAN and what can go out of it. Read the man pages to configure each of those.

It would be possible to add extra vNIC and vSwitch to implement DMZ, staging networks and “workstation” zones.

I have configured ESXi to autostart a bunch of VMs. But I also have configured the router VM with an encrypted disk. Which means that on reboot, nothing shall go in or out of the LAN until I enter the passphrase. Consider this pros/cons is up to you.

🐡 If you went that far, you have no excuse now to continue running pfSense on your ESXi 😈